PancakesCon is a free virtual cybersecurity conference run by @hacks4pancakes as a way for speakers to discuss not only cybersecurity, but NON-IT related hobbies and interests, which in this day and age is a complete breath of needed fresh air!

Along with an amazing speaker line-up this year, @TabbySable, and @ryancdotorg put on an amazing CTF event.  For PancakesCon, I opened the Space Cows CTF team to all new players who wanted to get their hands dirty, and what an amazing response and turn-out! With a tie for 2nd place, Space Cows went above and beyond expectation to get it done!

The only disadvantage to the CTF was the amount of time we had to grab as many challenges as possible, as PancakesCon is a 1 day event. :}

Getting some of the crackme's to run properly was a bit of a challenge in itself, but once you got Nur Geträumt to run, you were given the following statement:

While Shana poked around with the mini Mac, we searched around for possible clues to what album was being discussed. It was important to translate Nur Geträumt to "Just a Dream" in English.  We discovered that Nelly had a single called "It was all a dream", which came out in 2010 and was clearly not what we were looking for, but was great for a good laugh:

Doing a little more research we discovered that this song "Just A Dream" was created by Hate Squad on the album Pzyco! circa 1997.

I have included Shana's amazing write-up of these challenges, which can be found here and pasted below: https://blog.worldofcoding.com/blog/pancakescon2022-ctf-writeup/

The challenge description told us that the file was “a 68k Mac application on an 800k floppy disk image which can be used on any emulator which supports them. The image runs well under Mini vMac using any System 7 base operating system.”

To get our little challenge to actually run, I’d have to go figure out what a Mini vMac emulator is and how to run System 7 on it. The Getting Started docs were helpful, but unfortunately these things bitrot faster than you can say “bitrot”, and while I could download the base emulator and images of the different OS versions just fine, the tools to extract the actual runnable disk images don’t work anymore.

You see, while System 6 images are distributed inside binary packages with extension sea.bin and the provided extractor tool run just fine on these, System 7 is distributed in a different file format of extension smi.bin. Like tar.gz, these are double packed containers, an smi or sea file inside a bin. MacOS can unpack bin files just fine, but it seems that the code that can handle smi files is long gone, and the sea unpacker can’t handle smi.

Given that our challenge file is made to run on System 7, this was quite the issue for me, and it took me almost two hours to get it running properly. In the end, a lot of googling produced a blog post where someone went through the steps for doing it, with provided links for pre-extracted disk images of System 7.

While going through this exercise, I poked around inside the provided challenge file, and found a few interesting strings in it (seen above)

This sent the team on a bit of a chase down memory lane, trying to figure out what “album” this could mean. Nur Geträumt translates to “Just a Dream” in English, and we discovered that Nelly had a single in 2010 that was called “It was all a dream”. Could this be relevant?

apiratemoo also discovered a song called “Just a Dream” was created by Hate Squad on the album Pzyco! circa 1997. Another clue??

We get a prompt (a multiline prompt, even!) and we need to enter a password. Just hitting Try without anything in the input returned a short series of characters, entering anything else returned gibberish - but always the same length of gibberish, suspiciously long enough to be a flag. A Clue!

We tried different inputs from the band and album names we found, but nothing worked. Then, I entered PANCAKES - because we know flags in this CTF are always of the format PANCAKES{something in there}, trying the known parts of the flag might reveal something about the underlying encoding - and noticed that the result started with characters that formed a word, and that word had the same length as the flag prefix - a clue?

Someone (I was freaking out and didn’t catch who it was) suggested alternating the case of the input, so I tried PaNcAkEs and the result mirrored the case alternation with that same german word - Capital C Clue! Following the logic, if input PANCAKES gives me output verliebt, input verliebt gives me…

xorro was an ELF file that requested a four character password to solve: It returned a string based on the information given (in short, there are 9999 possible password combinations here). You could have gone the brute forcing route, but people used strings to help them out here.

Just an interesting note that we found this emulator while looking through the 390 architecture found in zorshift.

There is a fantastic write-up on this by echelon already, but Shana wanted to point out a few words:

If you didn't catch her write-up above please go to: https://blog.worldofcoding.com/blog/pancakescon2022-ctf-writeup/

Bootselfie is so much fun, and I still haven’t cracked it, so I’m not going to link to any spoilers until I figure it out!

The challenge file is identified as a DOS/MBR boot sector. Before anything else, a quick look into the binary reveals interesting strings:

The intro blurb helpfully mentions several emulators that can potentially run it, and I found that qemu did the best job of it.

Turns out, the string is what shows up when the binary boots up.

Hitting any key outputs it, and when you input any 6 characters, the screen turns to snow.

Peeking at code in IDA, one can see the code reading input one character at a time and echoing it to the screen until it reads 6 characters:

at which point it does… something…

What that something is, I ran out of time to figure out!

The PancakesCon CTF was challenging, fun, and definitely had me working on things that I was not totally familiar with. This was my first CTF. It was a little daunting but my team was super supportive and we exceeded all my expectations. Here's a walkthrough on how I captured the pwn-1 user flag.

There were a lot of machines on the CTF network. Some of them were just decoys but one of the machines had an unusual service listed in the nmap scan:

On the main screen you could list what users existed or log in as a new or existing user (no passwords required). The following screen gave options for Send Message, Check Message, and Logoff.

The first thing I tried was some SQL Injection since there was also PostgreSQL running. Presumably thats the backend db for the messaging service. I didn't make any progress with this approach and soon moved on.

It seems to be a stripped down version of the source so that you can approximate the function of the program but not compile and debug it locally. I focused on the message sending system(message.m). Specifically where it reads the message in and assigns it in a string. I figured that this would be a good spot to attempt an overflow since there isn't a bounds check on the input.

Just to do it quick and dirty I copy pasted a lot of "AAAAA..."s in. Nothing happened at first so I just added more until...

Progress! We crashed and were now at some sort of prompt. Standard linux commands were not working though.

Hmm...time to do some research on what the heck GTM is. Googling gtm on its own returned nothing useful but eventually I stumbled on this:

Okay so we're in some sort of debugging environment. The next goal is to figure out how to run system commands or to escape the debug jail. This involved reading a lot of the manual which took a while but the solution was simple.

Typing ZSystem; at the GTM prompt would drop to a shell. From there it was easy to get the user flag.

I think I may have inadvertently given other teams a hint on this because one of my teammates was able to get to the GTM prompt simply by checking a users messages.

I think that the overflowed message somehow saved and then would instantly fault when checked. I hadn't even considered that this was possible but in the future I'll be more mindful of that sort of thing. There wasn't an option to delete messages either so I couldn't have gone back and fixed it anyway.

This was my first CTF so the meta-game is something that I'm still learning. I also hadn't considered that I might want to do a write-up so I unfortunately don't have the screenshots I'd like to include.

This was a very fun and challenging CTF and I look forward to more in the future. Thanks to [Tabitha Sable] for creating the challenge and to the PancakeCon organizers. See you next year!

Github provided the following gem and we were able to hardcode the ip:port to grab a shell on port 8000. flag.txt was in the base directory, but needed root.

"Find net-1 on the challenge network, study it carefully and determine the flag"

Grabbing the flag for net-1 consisted of doing exactly what the statement above requested: A more in-depth nmap scan would list it within the results, but you can also use tools like sslscan to do the same. :)

SNMP enumeration did the trick here.  You could run snmpwalk to pull community strings that contained the flag. onesixtyone within the flag is a tool reference for snmp enumeration.  I didn't grab a screenshot, but you can find an example of one such tool below:

Enumerating the SMB share that was open on the .13 address and utilizing crackmapexec with impacket pulled information along with the flag here:

At the end of a long day filled with great talks, great fun and new friends, we called it an evening, went to take a break, and maybe ate some pancakes for dinner.

I look forward to seeing what PancakesCon has in store for next year! 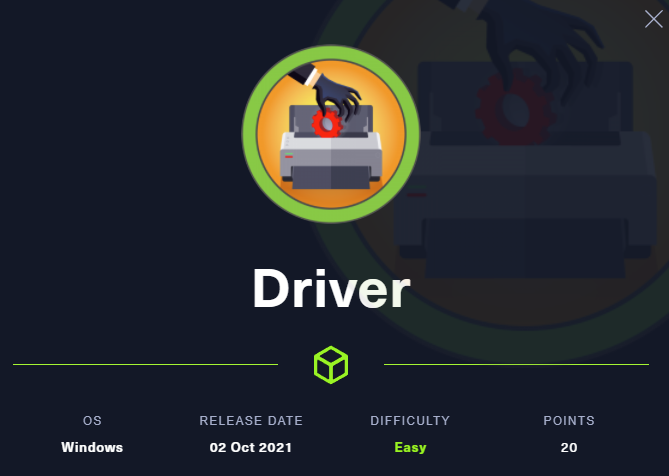 Driver was a really fun box for me, not only because it

Driver was a really fun box for me, not only because it